Using the Handicap markets on Rugby betting can be a very profitable arena. Rugby is a high scoring game and therefore can have a wide spreads of Handicap’s lines according to the bookmaker.

But I do find that Bet365 offer the best value handicap lines and prices. Their range on handicap in-play markets are the best in the business and should always be explored if you want an in-play bet or want to hedge your position.

Here are how the Rugby markets work on the European and Asian Handicap lines as well as the strategies I employ to increase my betting bank.

Personally, I focus my attention on Rugby Union and more specifically the big international matches.

The example below illustrates the Six Nations matchup between England and Italy in February 2015. England were big favourites and were unbackable at 1.01 in the match winner market. But the Handicap markets will offer many more opportunities. You can see the wide spread of handicap lines and the prices available. 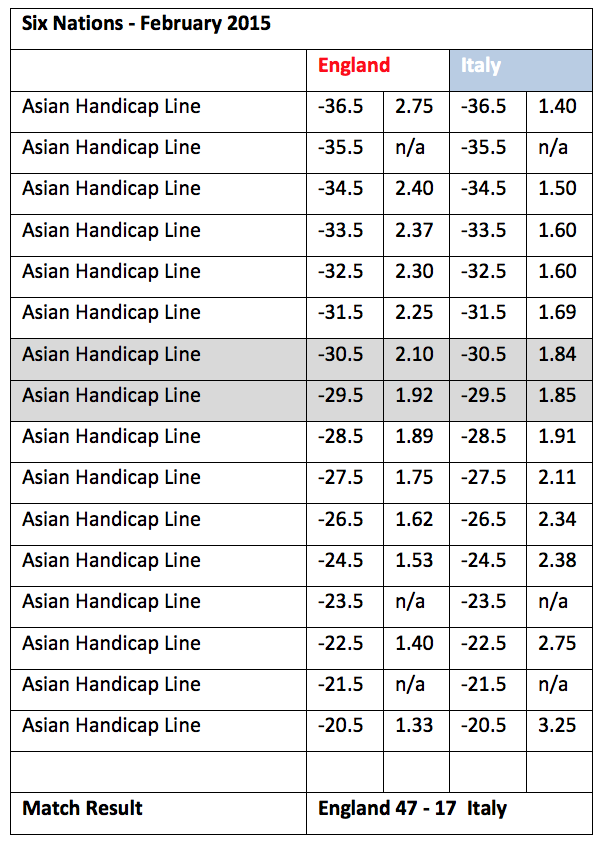 England won the match by 30 points so the bookmakers were spot on with their handicap line, the grey lines above show the odds of 1.92 on England covering -29.5 handicap.

For those of a nervous disposition that doesn’t mind which team wins the match, then I would suggest looking at the over/under points handicap markets. Here we are concerned with the total number of points scored and whether or not it goes under or over the handicap line set by the bookmaker.

Using the England v Italy game as an example on the over/under, you can see the range of spreads available with the prices quoted. 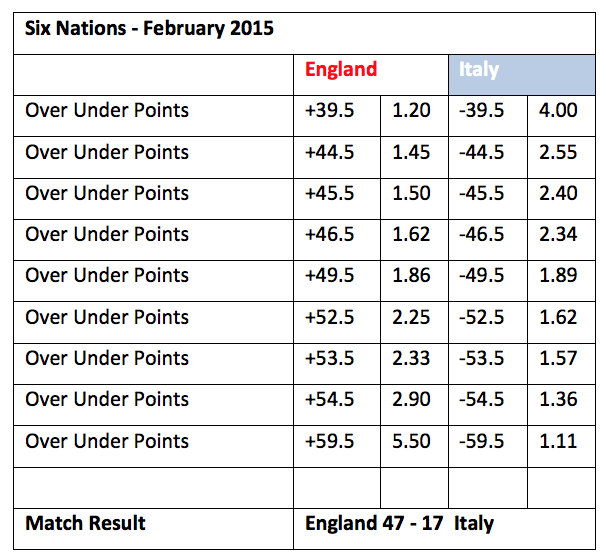 The match itself produced 64 points, so the bookmakers were well out of their estimate of around 50 points so backing Overs on any line here would have proved profitable.

I try to identify, if possible, where the value lies in the over/points market by assessing the scenario around the game.

The final round of matches in the 2015 Six Nations was a perfect example of where the overs would be of interest. England headed into the final game against knowing they needed significant point difference to win the trophy, so with an emphasis of attacking Rugby this also left them vulnerable to the French attack – in the end England and France shared 90 points, which was well over the handicap line set by the bookmakers (around 46/47 points). 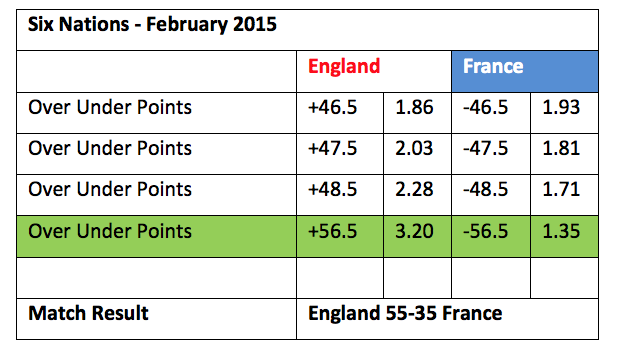