Best Dog Tracks in the UK

There’d be few arguments to the claim that dog racing in the UK has been on the decline over the last 20 years or so. The way in which we socialise and also the popularity of the sport in general have been major factors in this.

But over the last couple of years in particular things have started to finally level out, and there has even been a slight increase in the number of people that are heading to the dogs. As a result, there is more money being invested by racetrack owners and therefore the facilities have improved massively. This makes for an improved social side along with an increase in the calibre of races that are taking place.

The UK plays host to some of the best greyhound racing tacks in the world, and whilst numbers may be down from their peak you could still argue that it’s now a case of quality over quantity. What’s great about each of the tracks that we’ve listed here is that they all offer something a little different, which keeps them fresh.

Below we’ve included what we think are the best dog tracks in the UK right now. They aren’t in any particular order and the list will be updated with any refurbishments to old tracks or even new tracks that are built.

We can’t really include a “best of” article without mentioning the historic Belle Vue Greyhound Stadium in Manchester, can we? The track has been open since 1926 and is very much thought of as the home of greyhound racing in the UK.

The track plays host to some of the biggest races in the greyhound calendar each year. These include the likes of the Scurry Gold Cup, The Laurels, and the Oaks (one of 7 Classics in greyhound racing), to name just a few. As a result, more prize money is offered at Belle Vue than at any other track in the country.

Even though it’s based in the north, Belle Vue is able to attract racing fans from all over the country. It’s relatively accessible for those in the south as well as those at the extremes of the North of England, which means it can get big crowds at the big meetings.

It’s one of the best stadiums to go to because even when there is a pretty standard meeting with not too many notable races the place can be packed, especially on a Friday and Saturday night. The track has defied the decline other stadiums have seen in that it is still a popular spot for socialising and the bars and restaurants are usually very busy.

However, its future is in jeopardy despite its continued popularity as plans to demolish the stadium and build new housing on the site were passed at the end of 2019. 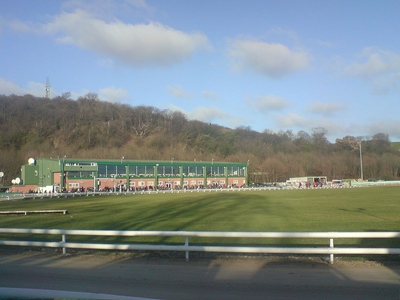 Nottingham Racecourse is widely considered to be one of the most accessible in the country. It’s located right in the heart of England, which means that transport links are frequent.

The location of the track – just 3 miles from Nottingham city centre – also means that once you are in the city you are only a short bus or taxi ride from the track. This makes it a popular night out, with racegoers often heading straight into the pubs of Nottingham following a successful nights racing.

The course got what was an unlikely boost to its status though, as it benefitted from the closure of Towcester to now host the Derby. The race is the widely regarded as the biggest in the UK and has a massive winner’s cheque of £175,000.

As you can imagine, this is the highlight of the years racing at Nottingham and whilst they do run other prestigious races such as The Select Stakes, The Produce Stakes, The Betfred Eclipse, and The Guineas, to name just a few, none of them are really in the same class as the Derby.

The bigger events at the track take place on a Friday and Saturday night. The facilities possibly aren’t as modern as they could be, but the atmosphere when the place is full is second to none and one of the main reasons why people flock there in their droves. 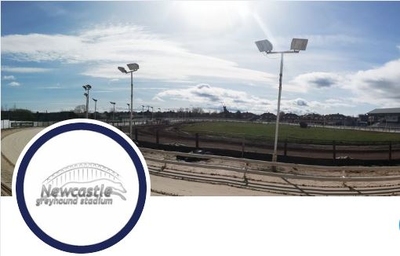 There is a reason that Newcastle is listed near the top of just about every “best night out guide” in the UK. It’s not just what the city has going on but the local people’s appetite for fun as well, and the dog track is no exception.

It’s been in exitance since 1928, which makes it one of the oldest in England. It’s not changed an awful lot since then to be honest, but a 2003 renovation did bring the course up to modern day standards.

Many go to have a good time and absorb that famous Geordie atmosphere, but the track has a host of high-profile races that take place throughout the year too. The standout races are that of the Laurels, All England Cup, and the Northern Puppy Derby. The fact that they are all “opens” means that the crowds flock given that often they can be local heroes who own the dogs and are in with a chance of winning a national title.

Racing takes place at the track on Wednesdays, Thursday, Fridays, and Saturday nights. It’s a party atmosphere and you’re just a 10-minute metro ride to the centre of the city to continue a night out once you’ve finished. 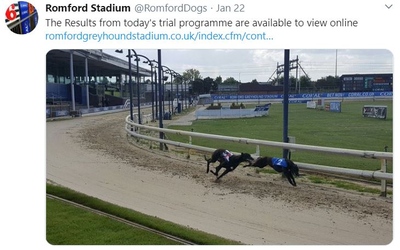 Romford is now one of just two dog tracks still open in London, after several dozen closed their doors over the years. The site has been running since 1929 and there are few better in the country for the calibre of racing and the good time that people turn out for.

The stadium holds a capacity crowd of 4,300, which makes it one of the biggest in the country. They’ve been able to win “best racecourse of the year” numerous times before, which shows that they are highly recognised within the industry as well.

Fun fact – Remarkably, Romford was the home of cheetah racing in the 1930’s when it (rather unsuccessfully) was trialled.

The calibre of racing throughout the year is strong and the standouts are that of the Essex Vase, Champion Stakes, and the Golden Sprint. Given that they are one of two tracks left in London, Romford is now one the capitals only greyhound racing outputs, which means that it’s highly important that this site remains open for the industry as a whole, but more importantly for dog racing in London.

Sheffield has one of the biggest tracks in the UK and can host up to 4,000 people at each meeting that they run. It is technically called Owlerton Stadium.

It’s another track that benefitted from the glory years of the early 1930’s, since it opened its doors in 1929. Since then it’s been an iconic part of the Steel City and its still one of the best racing nights in the country.

There is a meeting almost every other night at the track, with 25 meetings per year and over 300,000 visitors in an attendance. The track hosts a number of high quality races, none more so than the Steel City Cup, Dransfield Invitation, Yorkshire Oaks, Queen Mother Cup, and the Harry Holmes Memorial.

It seemed unfair not to mention some of the most famous tracks in the history of greyhound racing just because they have been forced to close their doors. After all, these places hosted races and shaped the industry as we know it.

So here are a few tracks that we have sadly had to say goodbye to. Some new, some old.

An ode to the fallen.

Whilst Belle Vue is notable for its historical importance within the greyhound industry, Towcester is equally important for it being one of the newest tracks in the country. It only opened in 2014 and initially saw great success. In fact, when it opened it was a huge boost to an industry that was seeing more closures than they thought they might be able to deal with.

In a clever move from the financial backers of Towcester, it was decided that the track be multi-use, which is why it’s only greyhound racing track in the UK that offers both dogs and horses on the same track (not at the same might we add!).

The £1.2 million investment spent creating this “racing Mecca” meant that the sleepy Northamptonshire town continued thriving, with dog racing held weekly at the track and spectator numbers on the up.

But Towcester was another to eventually fall into greyhound abyss. Money problems were cited after they had initially underspent their initial budget, only for them to come out and say that they had gone over, and quite considerably too. As a result, the course was closed temporarily in 2018, before being permanently shut in October 2019.

Wimbledon was one of the highest profile tracks in the UK for a number of years. They first opened in 1928 and had widely been regarded as one of the best in the business. The track was one that was highly diverse and hosted a number of sports over the years, including speedway and horse racing.

The site was best known for its hosting of the English Derby and held the event from 1985 until 2016 when the doors were closed. The event then went on to be hosted at Towcester, only for their doors to close as well. Many claim the Derby is now a cursed race, although this is a little extreme.

Unfortunately, Wimbledon was another London-based track that was worth more as development land than as a racecourse. It was eventually closed and then flattened in 2017, with 600 flats and a 10,000-seater football stadium built on the old site.

Whilst the Derby was the highlight of the year for the track, it was also able to host the likes of the St Leger, Grand National, Laurels, Oaks, Puppy Derby, Champion Hurdle, Champion Stakes, and the Wimbledon Gold Cup. All this highlighting just how iconic the track was.

The closure of Walthamstow in 2008 was one that shook the greyhound racing industry. The site was very much thought of as the leading dog track in the country and had been hosting some of the best races since their doors opened in 1933.

It was William Chandler, a bookmaker and founding member of what is now BetVictor, that was the driving force behind the track in the early days. He invested £24,000 to build the site along with its famous clock tower and also the country’s first totaliser board.

Before and even during the two World Wars, Chandler was keen to invest a lot of money into the track to make it the best in the country. He strived for that “perfect stadium” which reflected not only great facilities for punters, but also for the dogs and their trainers.

The stadium and the calibre of races really started to flourish following the war. Some of the most notable included the Grand Prix, English Greyhound Derby, The Arc, The Test, The Stewards Cup, and The Circuit, to name just a few. The stadium also famously hosted Sir Winston Churchill as he spoke in front of 20,000 people to try to gain re-election.

As a result of the continued expansion to the facilities and the fact that the best races were being held here, by 1988 turnover was more than £16 million per year and it was crowned as the leading track in Britain.

But the good times were few and far between in the nineties and, like most greyhound tracks, Walthamstow ended on hard times. As attendances fell, running costs outweighed the money coming in and as such, the land was sold to a development consortium in the form of London and Quadrant.

The final race was held there on the 16th August 2008. The stadium was demolished in 2012 and replaced with 292 new homes. However, the iconic art deco front of the stadium was Grade II listed and so that still remains on show as part of the development.