There are many aspects that make the sport of horse racing so appealing, from the animals themselves to the thrills and spills of the races and not forgetting, of course, the betting action which surrounds it all. Each of these features adds to the enjoyment of the sport in their own unique way but one thing they all have in common is the fact that, over the years, they have all developed their very own phrasebook.

From horse types to race types, running styles to betting movements and much more besides, the Sport of Kings has developed a language and lingo all of its own. And, whilst much of this racing rhetoric may be fairly self-explanatory, some of it does require a little clarification, particularly to those who may be new to the sport.

That’s where this quick guide comes in. Here we take a look at those words and phrases which crop up with regularity in the areas of the sport most commonly encountered by racing fans and punters. If you don’t know your ante post from your winning post, or your final declarations from your final furlong? Then you’ve come to the right place.

Considering they are the animals around which the whole sport is built, the obvious place to start is with our noble four-legged friends. All flat racehorses, and the majority of jumps performers, are thoroughbred animals – a breed proven to excel at the sport for centuries now.

The categorisation of racehorses, therefore, refers not to their breed, but predominantly to their age and/or sex. Whilst the following list is not quite exhaustive, it does cover the vast majority of animals those following the sport are likely to come across.

So, that’s the horses all sewn up. But what about the races they take part in? Just as with the animals themselves, races fall into a number of different categories. The aim here is to provide suitable contests for runners across the full range of experience, ability and distance preferences.

The racing classification system largely deals with the ability question, operating on a descending scale, with Class 1 contests being for the most talented performers, moving down to Class 2, Class 3 and so on. In both flat and jumps racing the Class 1 categories then contain further subdivisions. These being Group 1, Group 2, Group 3 and Listed on the flat, and Grade 1, Grade 2, Grade 3 and Listed over jumps. The Class of a race will always be noted alongside the race title, as will the distance.

The remaining race information, relating to the experience of the runners, and the conditions under which the race will be run, are then found within the race title itself. And it is here that our next list of racing jargon comes in.

Take, for example, the race title of “Troy Asset Management Novice Stakes” which took place at Ascot on 1st October 2021. This title follows a format found in the vast majority of race titles, in stating the sponsor of the race first, in this case “Troy Asset Management”, followed by the race type of “Novice Stakes”. But what exactly do these race types tell us about the race? Let’s take a look at the most common phrases found within British and Irish race titles.

Race Distances: How Long Is a Furlong? 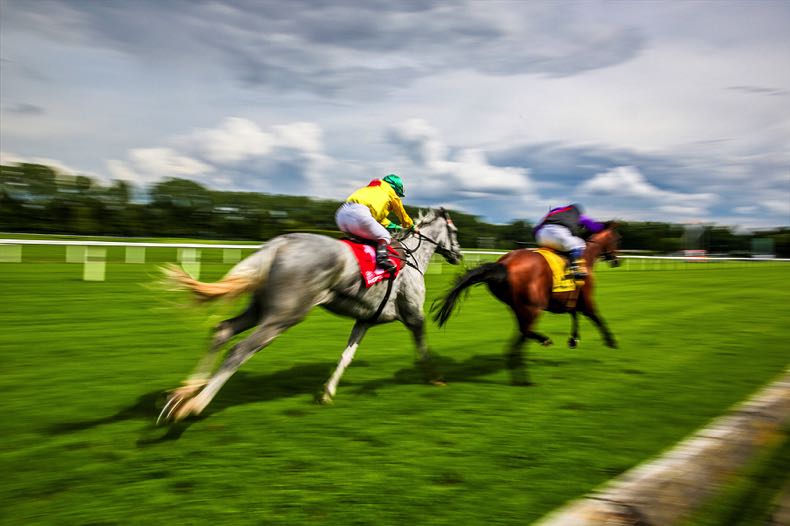 Easily one of the most commonly asked questions by racing newbies concerns the distances of the races, and specifically “what exactly is a furlong?”. And it’s no wonder really, as this rather antiquated unit of measure – universally used in defining race distances in the UK and Ireland – is rarely spotted anywhere else in everyday life. But where did it come from?

The word furlong descends from the “Old English” Furlang, which is, in turn, an amalgamation of the words “fuhr” and “lang” – meaning the distance a team of oxen were able to pull a plough before becoming exhausted.

What, you may ask, has this to do with modern-day horse racing? And the answer is, very little that we can think of. A furlong was nevertheless the standard unit of measure during the 16th century – the time at which horse racing really began to take off in this country – making it the logical choice in the denoting of race distances at the earliest tracks. With that tradition set, later tracks followed suit and the relationship between horse racing and the furlong was set. Furlong may be the unit of measure, but it is not the only distance-related racing term which it pays to be aware of: 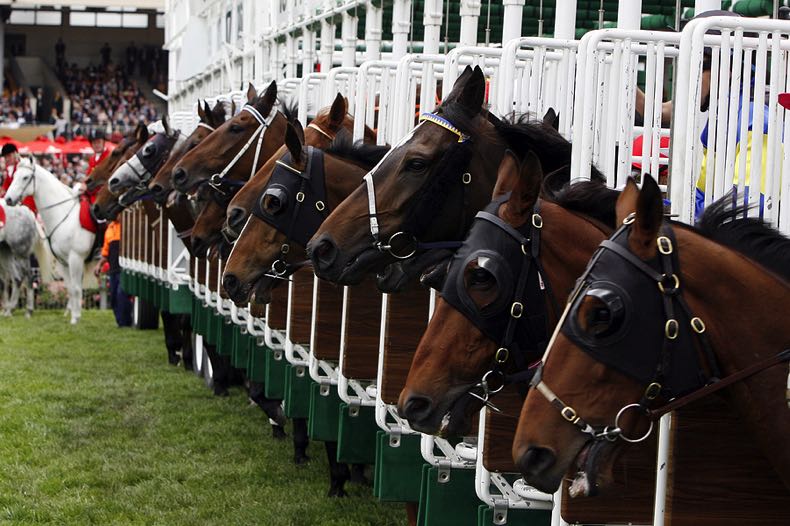 Tune into the racing on a Saturday afternoon and it likely won’t be too long before you hear phrases such as “really improved for the first-time tongue tie” or “we may need to try him in blinkers next time”. Tongue tie? Blinkers? What are they talking about?

Both a tongue tie and blinkers fall into a category known as racing aids. Optional pieces of equipment, these items are often reached for with the aim of improving a horse’s performance. Sometimes they seem to make very little difference at all, but on other occasions, they can transform a horse entirely. If a horse is underperforming, one of the following may help.

Watching a Race: In Running Comments

Another area where racing terminology regular crops up is during the race itself – and specifically in relation to the language used by the racecourse commentators. Of course, each individual commentator will have their own individual style, but there are nevertheless a number of words and phrases which have become almost universally used to describe the unfolding action – many of which also appear in the post-race reports:

Ante Post or Day of Race: What’s the Difference? 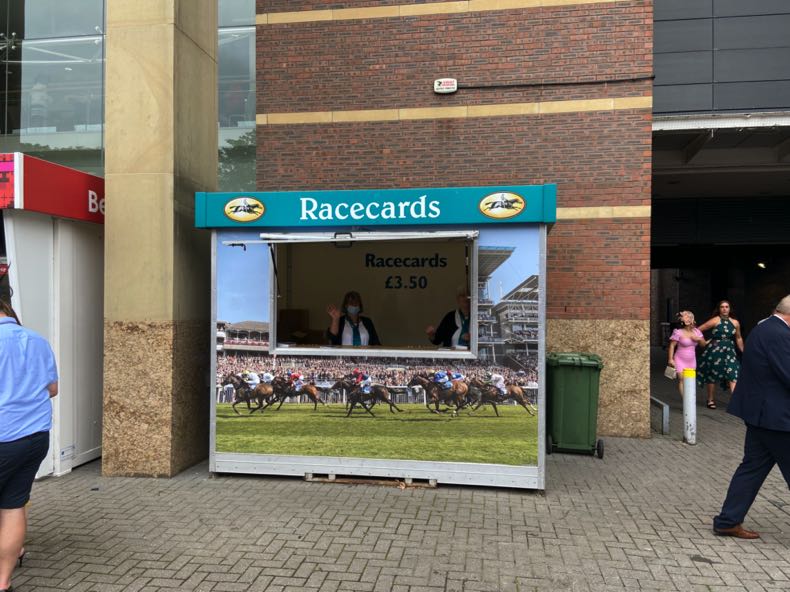 So far, we have discussed terms related either to the horses themselves or the races in which they take part. There is however a rather important element we have not yet touched upon. We are of course speaking of betting, the feature which, for many, really makes the sport tick. And just as with the sporting elements, horse racing betting also features many words and phrases which may take a little explaining.

In all honesty, there’s a significant chunk of this lingo that inexperienced punters needn’t worry too much about. It’s nice to know for instance that “Burlington Bertie” is a slang term for 100/30 and “Double Carpet” means 33/1, but memorising such information is not really essential to your betting experience. There are however a few key phrases which it does pay to understand, including those concerning the time at which you place your bet. Let’s take a look at the key terms involved in the world of ante post betting.

Number of Runners and Each Way Betting

This next section deals with what may well be the most common betting related query in betting shops up and down the land. What exactly is each way betting? How many places pay out? And how do we work out the odds?

Helpfully, the exact each way terms for any given race will always be listed alongside the betting odds; be that at the track, in the betting shop or online. With the exception of special offers or promotions, these terms will always follow the universal rules outlined in the table below.

Too Close To Call: The Photo Finish 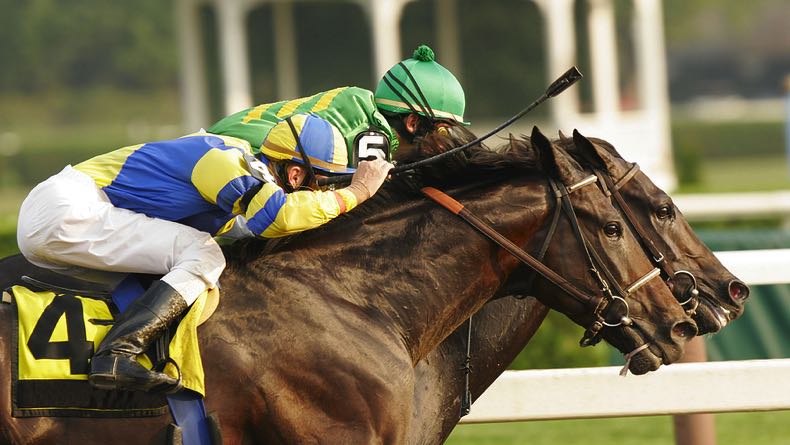 From understanding the type of runners taking part, the nature of the races themselves, and some of the lingo related to our bets, we now move on to a query that comes right at the end of the race – at that moment when the runners cross the finish line and the winners and losers are determined.

On many occasions, backers will of course immediately know their fate, with the winner of the race being clear for all to see. Not always though. Many times, the horse to finish first past the post will not be quite so obvious. What happens on those occasions when one or more runners appear to hit the line almost in unison?

A dead heat will affect the betting returns you can expect should you have backed one of the horses involved. In a two-horse dead heat, for example, half of your stake will be settled as a winner, with the other half being settled as a loser. For example, a £10 win single on an 8/1 selection will return a total of £45 (£5 at 8/1), rather than the £90 which would have resulted had the horse won the race on its own.

And, finally, we conclude with a list cataloguing the many things which can go wrong during a race, from problems at the start, to problems at the finish, and on to the various events which may result in a horse failing to complete the course. That is, those phrases you almost certainly don’t want to hear – at least not in relation to the horse carrying your cash.