The Rise and Fall of FOBTs 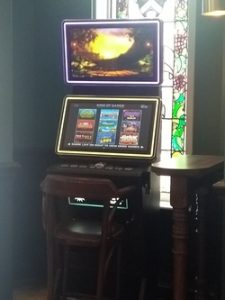 Fixed Odds Betting Terminals have been about since around 2000. They are one of the most controversial products in the gambling industry at the minute and have caused massive uproar with their connection to the rise in problem gambling, so much so that the government has had to step in.

If you’ve been inside a bookmaker in the last 10 years then it’s likely you’ve seen one of these FOBT machines. The terminals play host to a range of casino games, such as blackjack and roulette, so the punter can enjoy them within the confines of the betting shop.

These machines provide a lot of money for high street shops, and some can even put their ongoing survival down to FOBT’s.

The problem is that when the bookmakers start to make huge sums of money, it’s usually to the detriment of the punter. Campaigners against these FOBTs state that they are highly addictive and that too much money can be lost far too quickly.

These issues have put the future of FOBT’s in jeopardy, and there is still no real solution in sight. 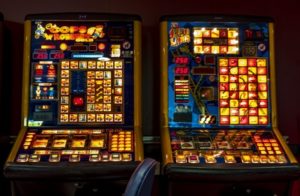 The first FOBT’s were introduced to betting shops up and down the country at the turn of the century, and they were seen as something of a futuristic version of the old fashioned fruit machines. Fruities, as they were affectionately known, had been a staple in pubs, clubs, casinos, service stations, and just about anywhere else you could legally have one.

The problem with these fruit machines is that they were limited to one game per machine, and they weren’t exactly space efficient. The FOBT allowed the punter to choose from dozens of different casino games from the same terminal.

As the bookmakers started to realise that punters were enjoying the variety and this new style of gameplay, their number began to increase in betting shops throughout the UK.

2004 saw a significant change in the way that the FOBT was classified in high street betting shops.

They were reclassified as B2 gaming machines, which meant they were to be governed in the same way as other B2 machines (fruit machines for example).

This meant a whole new framework around the limits for the stakes, prizes, and the number of machines that each premises could hold.

A limit was brought in restricting bookmakers to no more than 4 machines per shop, with the maximum bet on each machine being reduced to £100 with a maximum win of £500.

When betting first became legal in the UK in 1961 the betting industry hit the high street in force. At one point there were almost 16,000 betting shops and they were thriving.

But, like most industries at some point, the bubble started to burst. There was a natural decline over the years and by 2000 this number had almost halved to around 9,000 betting shops.

From the period of 2000 through to 2009 the number of shop closures that had been increasing year on year started to slow. For the first time in decades the decline halted, as shown by the graph below taken from ABB.uk.com. 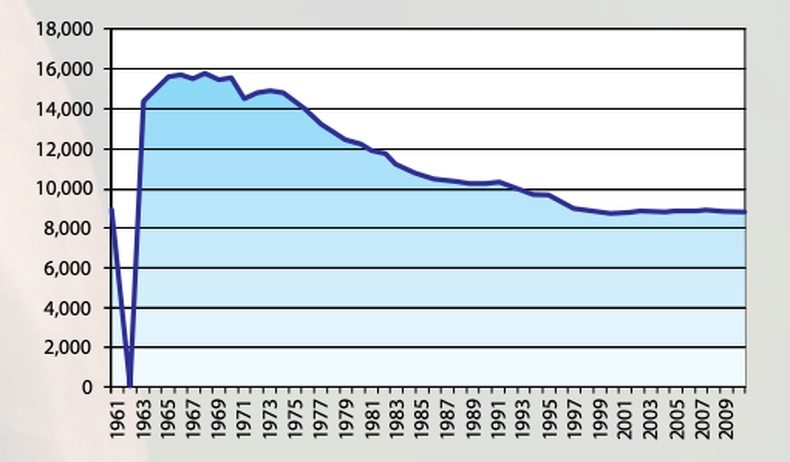 It is no coincidence that this coincides with the introduction of FOBTs and their growing popularity. These machines had singled handedly halted a 40 year decline in the number of high street betting shops.

2009 – Pressure from Government and Media

By 2009 there were over 30,000 FOBT’s in operation, and even though rules and regulations had been brought in to limit the stake, prize and the number of terminals that were on offer, the ease of access and sums of money being lost were still problematic.

Problem gambling was on the up and given lots of attention in the media. There was seemingly a new article every week highlighting someone whose life had been ruined by gambling.

A lot of these addictions had FOBT’s at the centre of the controversy.

In 2010, a British Gambling Prevalent Survey showed that problem gambling had increased in the UK by over 50% in the last three years and was even described as the UK’s new crack cocaine. 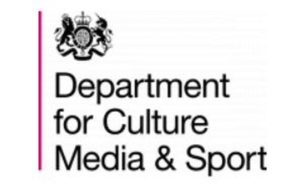 In January 2013 the heat was turned up on the government to take some action. The Department for Culture, Media and Sport filed a proposal to address the growing concerns and issues that the general public were facing.

They wanted another assessment of the maximum stake and payouts. However, the response they got from both the Gambling Commission and the government directly was that, whilst they agreed there was a “serious case” to answer for, the numbers and facts that were put forward were not strong enough evidence to prompt a change.

The fact that each machine was capable of taking over £18,000 per hour, and the fact that these machines were the main cause of gambling addiction in the country, were dismissed.

There was outcry from a lot of local councils who had backed the review from the DCMS. Liverpool council were the first in the country to vote to ban the machines from all betting shops within the city. As an alternative, they asked to allow them to drastically limit the amount which could be lost on these machines.

No changes were passed. 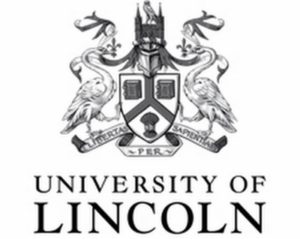 After continued pressure from both governing bodies, city councils and large swathes of the media, it was finally agreed that the Responsible Gambling Trust (RGT) would hand over an FOBT to the University of Lincoln for independent testing.

This is the first time that an independent source had been able to get hold of the terminal for testing.

Whilst there was no doubt the machines were operating legally, the testing was to determine how far these machines could be pushed in terms of extreme wins and most importantly, losses.

These results would eventually be the catalyst for changes to how these machines performed.

Pressure on the government to act and to change laws surrounding FOBT reached an all-time high.

By 2017 many city councils had spoken about their issues with problem gamblers, stating that these FOBT’s were the main cause of that problem.

It was also noted that British Gamblers had made a loss of £13.8bn for the year ending September 2016, an industry record. It also stated that the FOBT machines were responsible for £1.82bn of that amount, again a record number.

Losses for FOBTs had grown consistently, yet considerably since 2008. https://www.theguardian.com/society/2017/may/25/uk-gamblers-fobt-dcms-losses 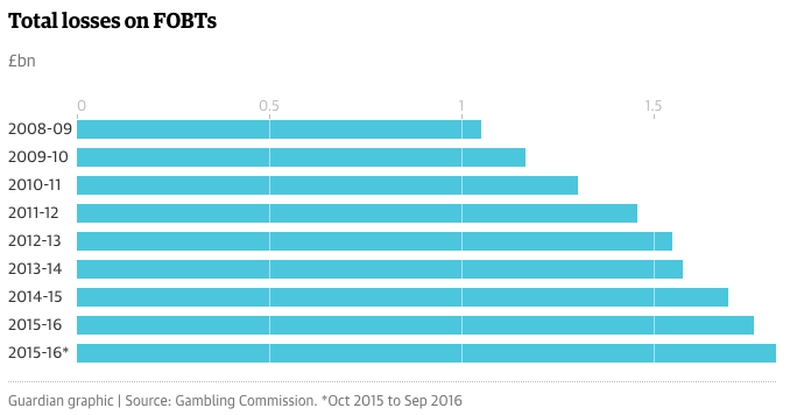 By this point, one of the biggest solutions being banded around the industry was to change the maximum stake amount from £100 per spin to just £2 per spin. 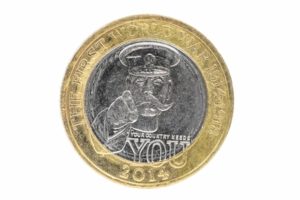 After years of back and forth trying to find a solution to the problem, it was finally agreed by the government to reduce the maximum stake on FOBT’s from £100 to £2.

Obviously, many bookmakers were massively against this, citing that this would almost be the end for high street bookmakers, and put tens of thousands of people working in the £5 billion industry out of work.

It would also mean a huge drop in revenue that the government would take in tax.

Nonetheless, it was agreed that the changes needed to be made in order to address problem gambling. The fact that one gambler had been able to lose over £13,000 in just 7 hours on a single machine highlighted the issue at large.

William Hill were one of the first companies to go public about their disapproval of the law change. They said that they were in talks to potentially close up to 900 betting shops as a result, risking over 4,500 jobs.

They had also reported a loss of £820million in the first 6 months of the year due to the fact it had to adjust a massive £915m accounting charge as a result of the change of FOBTs.

William Hill have since reached out to their landlords to ask for rent cuts to try and offset some of their costs. Cuts of up to 50% have been negotiated with some landlords, but they stated that unless more agreements could be met, then store closures were imminent.

Whilst William Hill were the most public about their concerns over the £2 max betting limit, the effects will have been felt industry wide, especially for the likes of Betfred, Coral and Ladbrokes, who make up the vast majority of betting shops in the UK.

Over 50% of high street betting shops were thought to be in danger, with numbers of around 4,500 being mentioned by the major bookmakers. 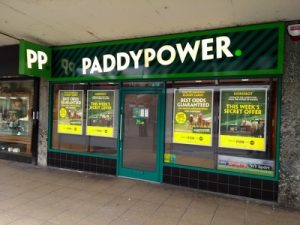 The government’s plans to change the maximum stake on FOBT’s were originally set to come into play in April 2019. They then backtracked and stated that they would delay this until October 2019 to allow betting companies to prepare for store closures.

However, after sustained pressure, they reversed this decision and stated that the original April 2019 date would be honoured.

Just 48 hours after the bill had been passed, two bookmakers, Betfred and Paddy Power, released new games that were in a ‘roulette-style’.

The games, which aren’t roulette, require the punter to bet over the counter with a member of staff rather than at a machine, but they are able to bet up to £500 per spin – significantly more than the £2 per spin limit on FOBT’s.

This game provides the first ‘workaround’ that bookmakers have rolled out but it’s unlikely to be the last. Both Betfred and Paddy Power state that this game, whilst appearing to be very similar to roulette, does not breach the new rules.

This is a fight that is far from over.