Forecast & Tricast Betting: What Is It & How Do You Calculate Your Winnings? 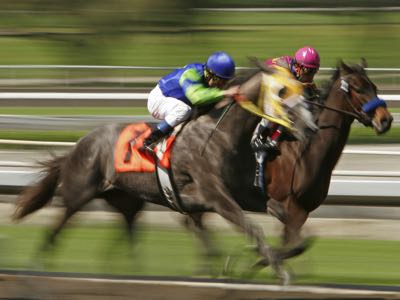 Forecasts and tricasts can be a little confusing for those who are newer to betting. Once you get the hang of them and know where they are best utilised though, these exciting bets are a great option to have up your sleeve.

In our guide to forecast and tricast betting we look at exactly how the bets work, how you place them and which sports and markets to focus on. We also explain why they are such popular bets, even though it is difficult to work out your potential winnings at times. 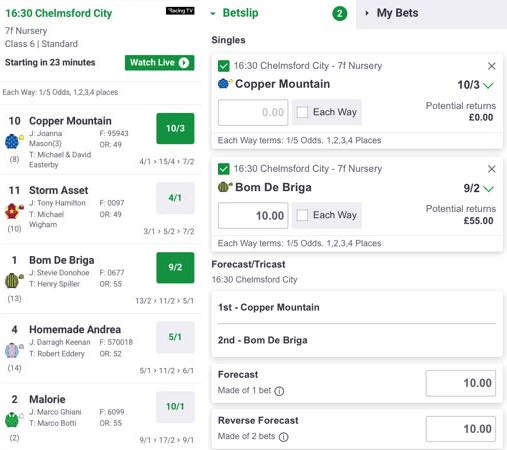 Forecasts and tricasts are similar bets but they have some distinct differences so it’s important to look at the two separately.

There are two types of forecast, a straight forecast and a reverse forecast. Both consist of two predictions, often about a horse or dog race, but operate slightly differently. A straight forecast is a single bet made up of two predictions. The first is a prediction of which selection will finish first and the second part of the wager is on which selection will finish second. If both of your picks finish in the correct position the bet is settled as a winner.

A reverse forecast is classed as a single combined bet and is a bet on two selections to finish in the first two positions in any order. In effect, you are hedging your bets compared to a straight forecast but, in reality, it is two separate bets of straight forecasts in the opposite – or reverse – order. So, if you are backing horses A and B for the top two, one bet will be AB and the other will be BA. This means that a £10 reverse forecast will cost you £20 in total, much like a £10 each way bet would.

The main difference between a tricast and a forecast is the number of selections. Whereas forecasts involve two selections, tricasts involve three selections. Like forecasts, there are two types of tricast. A straight tricast is the simplest type. Whether it’s horse racing, Formula 1, greyhounds, or anything else, straight tricasts are a single bet on which selections will finish first, second and third in that specific order.

How to Place Forecast & Tricast Bets

Forecasts and tricasts are complicated bets. Therefore, they are only offered in certain markets. For example, forecasts are only accepted on races that have three or more runners while tricasts are available on races in which “an official computer tricast dividend is declared.” The bookmakers thankfully make it quite easy to actually place forecasts and tricasts in markets where they are accepted. Take a horse race of 10 runners, for example. All you have to do is select the horses that you wish to back by adding them to your betslip.

Then, rather than adding a stake for one or other of the horses, you need to look a little lower on the betting slip. You will see an option to place your desired stake for the bet you want, usually with toggle tabs to change the order of the competitors if you opt for a straight up bet. Your bookmaker should show you how many bets you are placing (for example, six bets for a combination tricast) but it is still important to check your total stake before placing any bet.

Online betting betslips allow you an extra level of choice than simply backing two horses for a forecast and three for a tricast. For example, you could combine four selections into combination tricasts. The more selections you add, the more bets you place and the more expensive it gets. 24 bets are required to cover every tricast combination for four selections while for five selections it jumps to 50 bets. Essentially, these are bets where you are backing any four or five horses to fill the top three spots in any order.

How to Calculate Your Forecast & Tricast Winnings 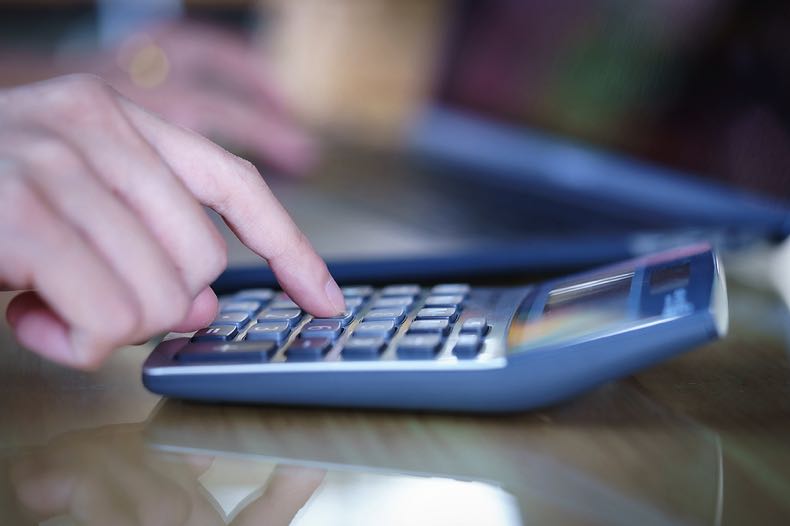 When placing a forecast or tricast bet you might notice that your potential winnings are not displayed as they usually are when placing a standard single or multiple bet. This is the case with many bookmakers who settle winnings based on a calculation which can only be done once the Starting Price has been confirmed. This is known as the computer dividend. Some bookmakers make it easier by offering a fixed price for forecasts and tricasts. While it is good to know how much you stand to win it is always important to check the odds offered as they can be shorter than the computer method.

The key point here is that forecasts and tricasts are very different bets to a double or a treble. You cannot work out the winnings by multiplying the odds of the different selections because the odds reflect the chances of a selection winning and only one of your forecast or tricast selections will win with the others placing. You can get some idea of what your returns will be by considering the “to place” market for your selections but usually you will not know the exact return until after the race.

If you place a forecast or tricast bet on a horse race hours, or even days, before the race begins, there is always the risk of a non-runner changing things. As ever, rules can differ between bookmakers but generally forecast bets in which one selection is a non-runner will be made void while straight tricasts will be settled as forecasts with the non-runner taken out. 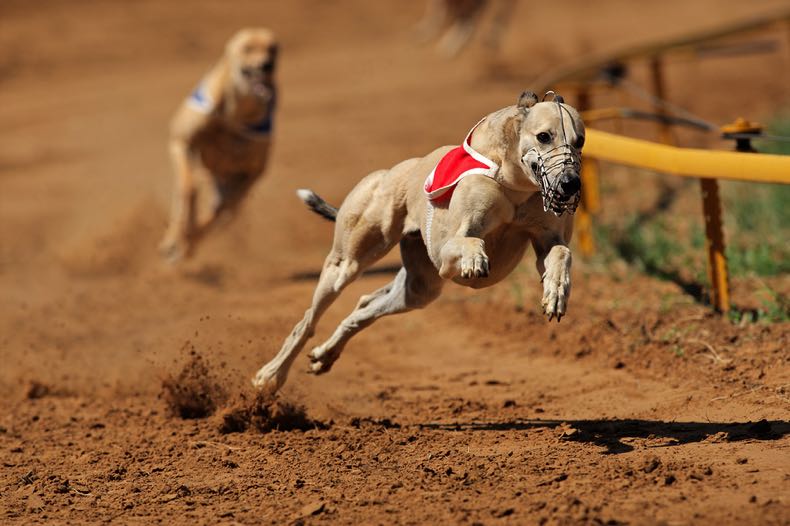 Horse racing and greyhound racing are the most popular sports for forecast and tricast betting. Known by some as exotics, the chance to back several horses in a single race and potentially win big is very appealing. Let’s say there is a red-hot favourite for a particular race which you agree is going to win but there’s also another horse in the field you consider to be the clear second best. Rather than taking the favourite on or backing the other horse each way, you can include the two horses into a forecast to potentially secure a nice win should they finish first and second. Another example is if there are three horses or dogs in a race that you cannot separate. Putting them into a combination tricast could secure a big win indeed if they fill the first three places.

Several other sports lend themselves to forecast and tricast betting as well. Formula 1, cycling, athletics and other racing events work perfectly. Wherever there is a race and a punter is either struggling to separate two or three runners or believes they can predict the first two or three home then forecasts and tricasts will remain a popular option.

Team sports can also work well in the right circumstances. Forecasts are a great way of approaching the group stages of international football tournaments or other long term outright markets if you don’t mind having your money tied up longer term. It’s important to note that bookmakers don’t universally offer forecasts and tricasts on all sports and certainly not on all events.

On many events they may offer bets that equate to this type of bet but they are offered as straight singles, rather than true forecasts or tricasts. In some ways these can be viewed as bet builder-style wagers which contain a number of predictions but are technically singles. Popular examples of these can be to name all three sides that will be relegated from the Premier League (either in the correct order or in any order, mirroring a straight or reverse tricast respectively); or to correctly predict which the top two teams in the Championship might be.

Whether it’s because you have several horses who you think can run well in a certain race or you fancy an F1 driver to make it onto the podium unexpectedly, forecasts and tricasts can see you secure some really big wins for small stakes. Of course, the flip side is that the longer odds mean a smaller chance of winning, which is why they are best viewed as a fun addition, rather than a serious way to make long-term profit. That said, we have known of some pro gamblers who have specifically targeted racing forecasts with decent success, so it is possible to regularly land these wagers.

Moreover, there are several examples of huge wins being secured via forecasts and tricasts. One famous example is that of a punter who placed a tricast on the 2021 Cheltenham Gold Cup. The punter, who had already won £250,000 on an accumulator earlier in the week, scooped a £140,000 payout when Minella Indo won the Gold Cup with A Plus Tard in second and Al Boum Photo in third.

Another example from the Cheltenham Festival comes from the year before. Willie Mullins won the first three editions of the Mares’ Novices’ Hurdle with the bookies’ favourite but it was the 2019 result that will live longest in the minds of punters who supported the Closutton master.

Among his entries for the 2019 Mares’ Novices’ Hurdle was the pair of ousiders, Eglantine Du Seuil (50/1) and Concertista (66/1). Those two took advantage of a poor run from the favourite Epatante to win the race and reward any forecast backers handsomely. Moreover, the Gordon Elliott-trained Tintangle came third at 40/1 which meant a £1 tricast bet paid out almost £74,000!