Dead Heats in Racing: How Common Are They & What Happens?

Followers of football, golf, cricket and other sports are used to seeing draws and ties. Horse racing fans are much more used to dealing with certainty. There is one winner and the rest are losers in racing … except when races end in a dead heat.

Rare they may be, especially in the modern era, but dead heats do happen in horse racing. It is, therefore, important for punters to understand what happens to bets in the event of a dead heat. We’ve taken an in depth look at dead heats and the rules that apply to them below.

What Is a Dead Heat in Horse Racing?

A dead heat can occur in many sports and really describes a situation when two participants cannot be separated. Let’s start by specifically looking at the basic question of what a dead heat is in horse racing. A dead heat is when the finishing position of two, or very rarely even more horses, cannot be determined so they are deemed to have finished at the same time. This can be for first place or one of the each way places (or, in theory, any position but it only really becomes relevant when there are bets at stake).

Dead Heats in Other Sports

As said, dead heats exist in other sports but you can think of them as horse racing’s equivalent of a draw. If two horses pass the winning post at exactly the same time there is no one winner. It is the same in other forms of racing such as greyhounds, cycling or sprinting. In other sports like golf, this outcome is called a tie and is typically broken by some form of play-off – a tiebreaker. However, in horse racing it is always referred to as a dead heat and no method of separating such horses is used (although in years gone by race-offs were held or the whole race was re-run).

Although most interest is paid to horses who dead heat for the win, dead heats can occur in every finishing position. The nature of the sport, where the strongest horses in a race regularly do battle for the win, means that dead heats are most common among the first two horses home but they do occur in other positions. That’s important to note from a betting perspective as the dead heat rules can have an impact on each way bets.

Dead heats may be entertaining for fans but horse racing as a sport tries to avoid them wherever possible. That’s why British horse races are equipped with high-speed cameras positioned right on the winning post. Photo finishes are a common occurrence in horse racing and almost always manage to sort out the winning positions. Dead heats are only called when it is impossible to separate two or more horses in a photo finish.

This is more and more rare as the technology allows the vast majority of races to have a winner, with timing and photo finishes accurate to the slimmest of margins. In the past, many of these races would have been declared as dead heats but now, as in many sports, technology is used to give us more accurate decisions. Thankfully, photo finishes are far less controversial or contested than VAR in football!

What Happens in the Event of a Dead Heat? 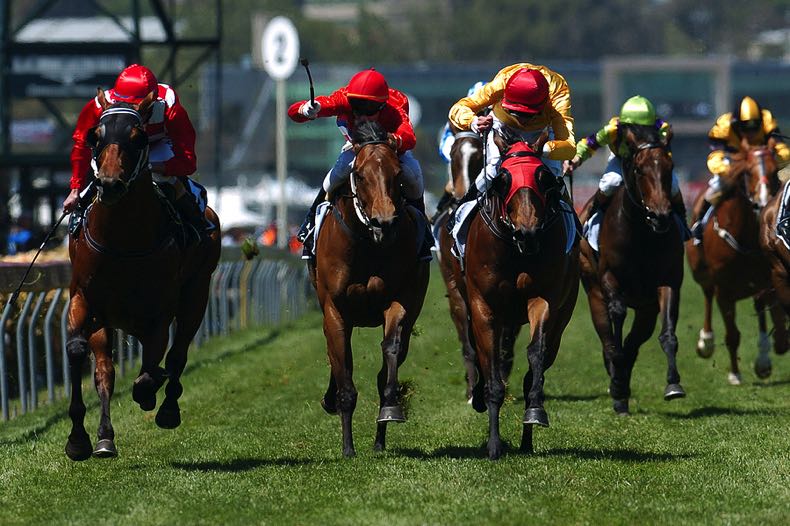 In races where a dead heat is called for the first two or more horses they are credited with finishing in joint first position. However, from a betting perspective it is not as simple as both horses being settled as the race winners and bets on both being paid in full. This would not be fair on the bookie, as the odds for each horse are based on there being just a single winner.

Dead heat rules are not something applied at the whim of the bookie, nor is it a case that betting sites are trying to deceive their punters. Dead heat rules are an industry standard, applied in exactly the same way at all bookies. The most important thing to know about bets and dead heats is that it is the stake that is split, not the odds. This makes a material difference.

It is possible to lose money if your horse dead heats. This happens when horses have a price less than evens. Take a £10 bet on a horse at 10/11 which dead heats with one other as an example. The stake is halved so the return is £9.55 (4.55 net win, £5 stake). When you take into account the £5 losing portion of the stake the total is a net loss of 45p.

The calculation for dead heats is a little more complicated when it comes to each way bets. That’s because each way bets are technically two bets; a win bet and a place bet. If you back a horse each way and it dead heats for first place, only the win portion of the bet is affected as the place portion is simply settled a winner at the applicable each way terms.

The final thing to be aware of is the impact on each way places. In the same way that horses which dead heat for the win are deemed to share first place, horses can share the final each way place in a race. In this instance, the place portion of each way bets are treated the same as other dead heat winners with stakes divided.

For example if your horse dead-heated for fourth in the example above, tying with one other runner, effectively your pick has finished half fourth and half fifth. The win portion of the bet is lost, as is half of the each way bet. However, you will still be paid £5 at 5/1 (a quarter of the odds) and with that £5 part of the stake back you will get a return of £30 and an overall net win of £10.

How Common Are Dead Heats?

Dead heats are a relatively rare occurrence, more so since the introduction of high-resolution cameras at professional racecourses. They do happen time and again though and sometimes at some very big races. The Epsom Derby (twice), 2,000 Guineas and the St. Leger have all had dead heats in years gone by. All three dead heats occurred in the 19th century though and in a couple of those occasions the race winner was settled by a deciding heat.

While photo finishes have greatly reduced the likelihood of dead heats, it remains the case that sometimes horses just cross the line at exactly (as exactly as current technology allows us to measure at any rate) the same time. Indeed, there were eight dead heats in British, American and Australian horse racing alone in 2021. Admittedly that is from thousands of races but it shows that it is worth being aware of dead heat rules.

The highest profile of those dead heats came in the Group 1 Oakleigh Plate at Caulfield Racecourse, and more interestingly for UK punters, in the Grade 1 Fighting Fifth Hurdle at Newcastle, where Epatante and Not So Sleepy crossed the line at exactly the same time.

As you might expect, three-way dead heats are much rarer than two way dead heats. There have only been a handful of these since photo finishes were introduced and most of these came in the first half of the 20th century. There was, however, a three-way dead heat in a low grade race at Evangeline Downs, Louisiana in 2014.

There are no precise stats on exactly how often dead heats occur filtered down by racing in the UK, in other parts of the world, or overall. However, when we consider only official races in major horseracing nations, we can probably say that we see a dead heat around once or twice a season on average, with 2021 certainly an outlier in having so many.